We took the boys to one of my favourite places in Berlin this week, the Soviet War Memorial in Treptower Park.

Overview of the site

The boys had a great time running and climbing around and I got the opportunity to reacquaint myself with the place, take some photos and read the information boards, which had been put up since my last visit.

Column at the entrance

While I don’t like the war memorial for any political reasons, I find it a fascinating place to visit since it was built during the raw times after the end of the Second World War in a city that was being still being fought over, albeit politically. I like it because of its absolute scale (it was for many years the largest Soviet war memorial) because of it’s dramatic effect, because of the amazing iconography, and because it now represents something that was once so powerful and it now something that has largely been confined to history. 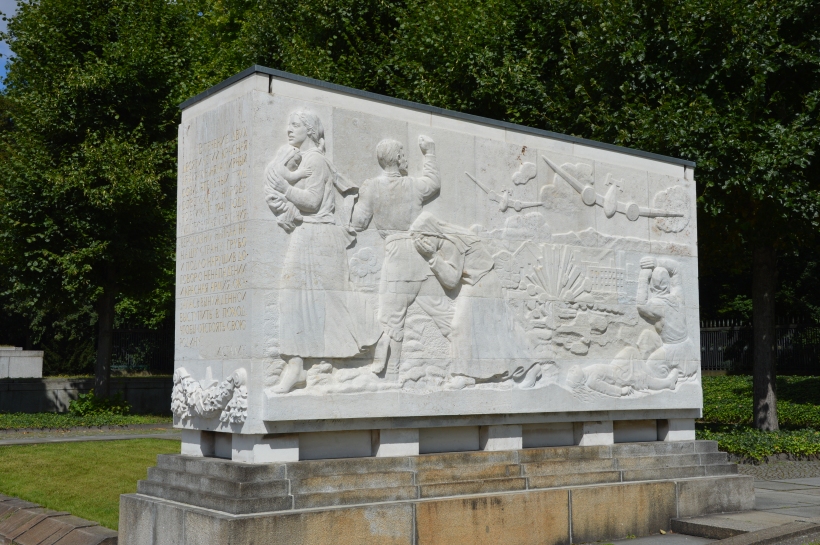 I like it too because, as well as the political statements proclaiming the glorious Soviet era, there are acknowledgements of the suffering that took place during that terrible conflict, and the central focus of a victorious soldiers rescuing a small child while simultaneously crushing a swastika under his huge boot. However, beyond this is the fact that around two thousand soldiers are buried here, and it is a reminder of the awful cost the war incurs. So as well as being a place where one can be awestruck, it is also a place of reflection and a reminder that all sides suffer.

The centrepiece of the memorial

Seeing the boys play there also reminds me that we are lucky to live in a time where for us, in Europe, real conflict is rare and we have more modest worries than those of 60-70 years ago. It reminds me that we owe it to our children to ensure that they don’t have to go through what our grandparents did. In this way it also reminded me how much becoming a parent changes the way we look at things.

In the past I perhaps took a more carefree attitude towards life because there was just me. Then Karen came along, and then the boys and I now think much more about the future, about the boys future in particular. I wonder what they are going to be and how they are going to make their way in their lives, and how I will help (or hinder) this. It struck me that as well as those who fell and are buried in Treptower Park, there are those who survived but saw their lives interrupted and had to endure terrible conditions. Many lost a significant part of their growing up, which in itself I find tragic.

This then is why I find the Soviet War Memorial so inspiring, not because it makes me pine for an era gone by, but because it does it’s job of helping me to remember, but helping me to reflect on the things that important to me too. That as a father I have a great responsibility both for and to the boys that they will never have to experience what our grandparents and the generations before them did.

One thought on “Berlin #2 – Remembrance”