After their bath the boys are allowed a ‘bedtime hour’, which is actually 10 – 20 minutes of watching a DVD or clips from Youtube. There is often a bit of opposition to switching the tv or computer off, but this soon disappears when the offer to race upstairs on our backs is made. The boys fairly quickly brush their teeth, but then the real bedtime hour begins. This is the hour that it often takes us to get Sam settled.

Jake is usually asleep within 15 minutes of the light going out but Sam tries everything to stay up longer, and we seem to have tried everything to get him to settle.
It all started when we moved house and Sam went into a ‘big boy’s bed’ rather than the cot he had previously slept in. He seemed to settle quite well at first, but then seemed to get more and more bold in coming downstairs with a big grin on his face.
We have become more and more frustrated by this, and we are losing more and more of what we see as valuable time together once the boys have gone to bed. We rarely go out as a couple at the moment, but we enjoy having a meal together, sitting chatting, or watching one of our favourite TV series (currently Homeland and Downton Abbey); and the two hours from 9.30pm to 11.30pm go by all too quickly (especially if I fall asleep while watching, though not usually while eating or talking)).
We have tried a number of strategies including:
We have looked at all sorts of different things but nothing seems to work. It is particularly frustrating because this is the first thing that we feel really stuck on. We have usually found a way through before, but not this time.
I realise that this is probably not a massive issue in the grand scheme of things, but at the moment it feels like one. It is a change that we feel we have not managed very well, and we really miss having more time just for ourselves; and we really feel that Sam needs a longer sleep than he is getting.
So it would be great to hear what others have done to reduce the bedtime hour.
What are your top tips for getting children settled?
Or are we lucky that it is only an hour?
Thank you.

Well Jake has been going to school for quite a few weeks now and we have been introduced to something that we were not quite expecting: ‘the school run’. We had been used to ‘the nursery run’ but it is not quite the same as the school run.

There was a certain flexibility with the nursery run, the only limiting factor being whether the boys arrived in time for breakfast; other than that we could drop them off when we liked. With the school run we have to get Jake there between 8.40 and 8.50, and preferably by 8.40 so we can do some learning with him first.

This has meant a tighter morning regime, which involves getting Jake up by a certain time (and strangely he sleeps much longer in the morning on a school day than at weekends) and then getting a great deal crammed into a short period; including the making of the lunch box and breakfast (which before was had at nursery).

On the first day we wildly overestimated how long it would take, with us hassling Jake to be ready on time and the arriving at school around ten minutes before the gates opened. As we relaxed we found that we were getting later and later until we were arriving consistently late, but after some negotiation with Jake (involving the amount of TV he would (or would not) be able to watch if he was late for school), we seem to have settled down into some sort of routine where we are not exactly beating down the school gates as they open, but are not racing to beat them shutting again; and to give Jake credit he realised that he did not want to be late for school either.

I do not think that either Karen or I had prepared ourselves for the stress that getting someone ready for school involves since the boys’ agenda is clearly different from ours at that time. Ours is purely focussed on getting everyone out of the house at the required time, while the boys’ is to do as much playing as possible for as long as possible (the TV stays firmly off in the mornings).

This is a great example of how our lives change as our children get older. We needed to get into a different morning routine and that was a change for us every bit as much as it was for the boys, but I think that now that the routine is established I hope we can be a bit more relaxed as we all drop into it. Our mornings will certainly not be the same again for many years, and I am sure that it will be different once we have two boys to get out to school in the morning, and so on. Because of this I often wonder who needs to be the most adaptable is it Karen and I or is it the boys? It is probably both, and while it feels like we are leading the change, are we really? Are we not just adapting, too?

It is certainly the case that unless we chivvied and cajoled every morning we would be unlikely to get anywhere, but I think we also need to acknowledge that actually it is not really that hard; and a sure sign that the boys are happy with their school and nursery is that they do not put up too much resistance in a morning. It is just that it does not always seem like that when we are in the thick of it. 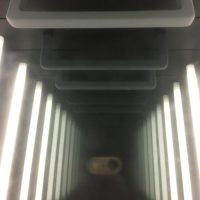